On loan from Southampton City Council

On loan from Southampton City Council

We are excited to announce GHT’s first Collections Exhibition.

Stunningly displayed in the climate controlled first floor gallery the paintings by Abraham, Sebastian and Henry Pether will show GHT as it was in the 19th century, when waves lapped against the Tower’s walls.

The paintings have never been shown in public together before, and they will shine a light on our opening theme, GHT: Beside the Sea. Abraham Pether and his two sons Henry and Sebastian lived and worked in Southampton in the late 18th and early 19th Centuries. Many of their paintings depict romantic and picturesque views of the town at a time when the coastline was dramatically different

The works portray the Old Town walls bathed in light and surrounded by water, revealing God’s House Tower’s previously prominent coastal position overlooking the sea. The Pether paintings offer a glimpse back in time, prompting us to consider how significant changes to the shoreline have shaped our modern city and subsequently positioned God’s House Tower inland.

We are very grateful to Southampton City Council and Hampshire Cultural Trust for the loan of these paintings.

The paintings are now on show. The Collections Gallery is accessible by lift or stairs.

Some info for you about the family and the ‘Moonlight Pethers’:

The renowned Pether family were renowned landscape painters who lived and worked in Southampton in the 1800s. This selection of romantic landscapes by Abraham, and his sons Sebastian and Henry depict a lost, intriguing scene from the city’s past, and represent the dramatic changes to the urban coastline GHT has witnessed during its 700-year life, making them a perfect introduction for this new era in GHT’s history, as it prepares to welcome new audiences when it reopens later this year.

The Pethers were recognised for their skill in depicting moonlight, sunsets and fire scenes. Following in their father’s footsteps, Henry and Sebastian created further works depicting Southampton Town Quay in close proximity to the coast, and GHT’s prominent position directly overlooking the water.

Industrial progress and post war development reclaimed and altered much of the coastline, repositioning GHT further and further inland, disconnecting it from the sea it once overlooked. With a modern development of the coastal landscape, including West Quay shopping centre and Ikea, this lost connection is not immediately obvious to local residents and visitors, and so this exhibition aims to bring this sharply back into focus.

Last chance to apply for our Visualising Policy Open Call! 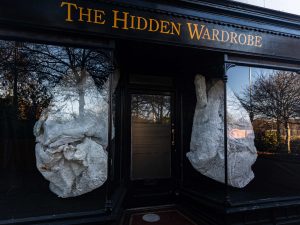